Mid September 2011 Waylon received a call from Chris Denham, Editor of Western Hunter Magazine and Co Founder of Outdoor Experience 4 All. Chris wanted to know if we knew anything about unit 1 and if we would like to go on a Early Bull Elk hunt with hunter Travis VonEnde. Waylon and Adam Munson decided to go and help Travis kill his first bull. Travis had recently undergone reconstructive ankle surgery and was still using his crutches and a walking boot. The night before the hunt Travis was asked what kind of bull he wanted to shoot, his reply was " one with horns."  Little did he know that the very next day he would be chasing Trophy Class Bulls. The first morning started off slow but things heated up in the afternoon. Waylon and Adam glassed a good bull in his bed and radioed Chris and Travis who were in the canyon below. Travis made his was across a flat and set up for a shot at the bugling bull. Travis missed his first shot but remained positive that he could kill a good bull. The next morning Waylon glassed a great heavy dark horned bull on the edge of a meadow. Travis and Chris tried to put a stalk on the bull but he was too busy pushing his cows away from other bulls. The same afternoon the bull was spotted about 100 yards from where he slipped out earlier that day. Chris and Travis made another stalk on him and followed him up a draw. Travis didn't miss this time. The bull scored over 340 inches and is one of the biggest bulls ever killed by an Outdoor Experience 4 All Hunter. The Arizona Ground Pounders Outfitters would like to thank Travis and Chris for allowing us to join such a worthy cause. 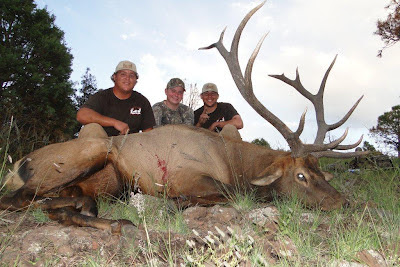 CLICK HERE TO VIEW MORE PICTURES
Posted by Waylon at 10:53 PM No comments: