Cash and Steel were out working the dogs when a fresh track was struck. A couple hours later the AZ Ground Pounders had treed a big female. 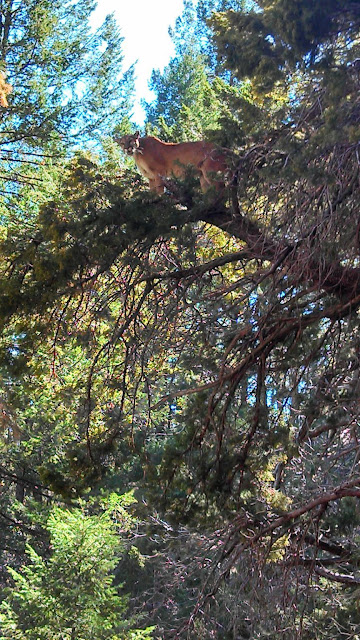 Posted by Waylon at 6:28 PM No comments:

Cash and Steel recently took Matthew Phillips on a Lion Hunt. This is what Matthew had to say about the AZ Ground Pounders Outfitters.
"These guys are the real deal. They are self made. They have 26 of the best dogs you will ever see. They are trailing a lion or looking for one to trail right now. They go lion hunting 6 days a week no matter if they have a client or not. From the second I met them I knew I had to try to get a lion with them. Over the last two years I have spent 12 days on horse back and walking all over with a great Houndsman we just couldn't get it done. The guy has great dogs just having a long streak of bad luck. So elk hunting this year I hunted with Cash and Steel and knew from the first day of hunting not only would I kill my lion with them but I would have two new friends to hunt with when ever I wanted. I signed up for my lion experience and I had to wait for two months because of work. While I was working for those two months it seemed like I would get a picture of another huge Tom with a guy holding it and Cash standing next to him about once a week or a video of them letting a female go, Torture. Then I packed up and prepared for a long 4 day adventure. It turned out 10 minutes after leaving the truck the dogs struck a track and we were in snow (which they hate hunting in snow but knew how bad I wanted a lion) the dogs were gone and they found the track and said it was a nice cat not the biggest but nice and they said we can pull the dogs and wait for a big Tom you have a lot of time and of course after previous adventures I just wanted to see one in a tree. So I said let them tree it and then we will see. 20 minutes later they had it treed. The cat jumped the tree as soon as it saw a human. They had it treed again in 200 yards and Cash and I snuck up to take a look and he looked at it and said its a pretty good cat but its a female, a big female, I asked him you don't shoot females right. He said not usually but we are in sheep country now and you like sheep a lot don't you and thats all he had to say, He started to say something and boom. I had my first beautiful lion. About a 100 yards away we found a coues deer doe she had killed the night before which I didn't like to see but there wouldn't be anymore like that from that lion or from kittens she would have had in the future and their Kittens. Turned out to be a beautiful cat and an awesome 1/2 day adventure (it doesn't happen that way very often no matter who you hunt with). That was a month and a half ago and I still talk to them 4 or 5 times a week about all the lions they are chasing and treeing and videoing with no client on some of them. If you want a great lion hunt with great people and unbelievable dogs, these guys are who you want to hunt with."
Thanks Matthew for everything and we look forward to your Dad's Hunt. 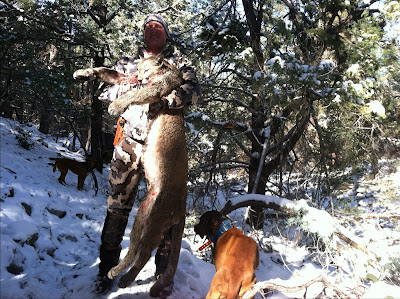 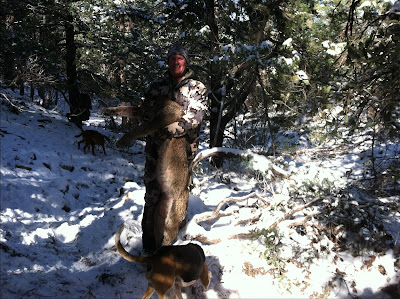 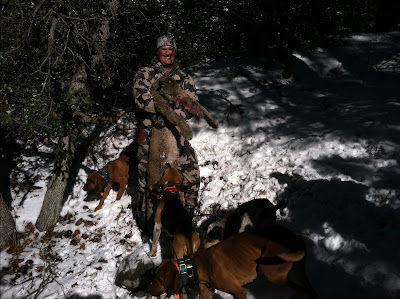 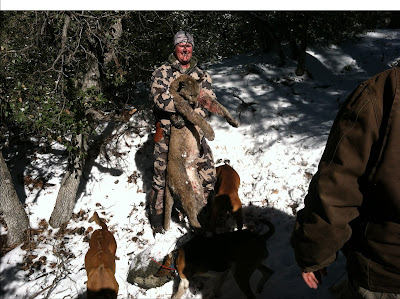 Levi had a great weekend fishing at the FLW Everstart Tournament at Roosevelt Lake. After the first day of fishing Levi was in first place with a 2 pound lead. The second day Levi was fished to a third place finish. The final day found Levi in the top ten cut. He fished hard and missed a couple fish but finished in 9th place. 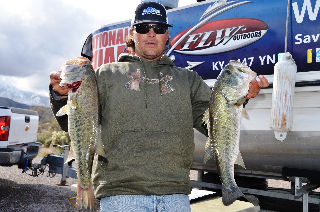 Posted by Waylon at 1:58 PM No comments: